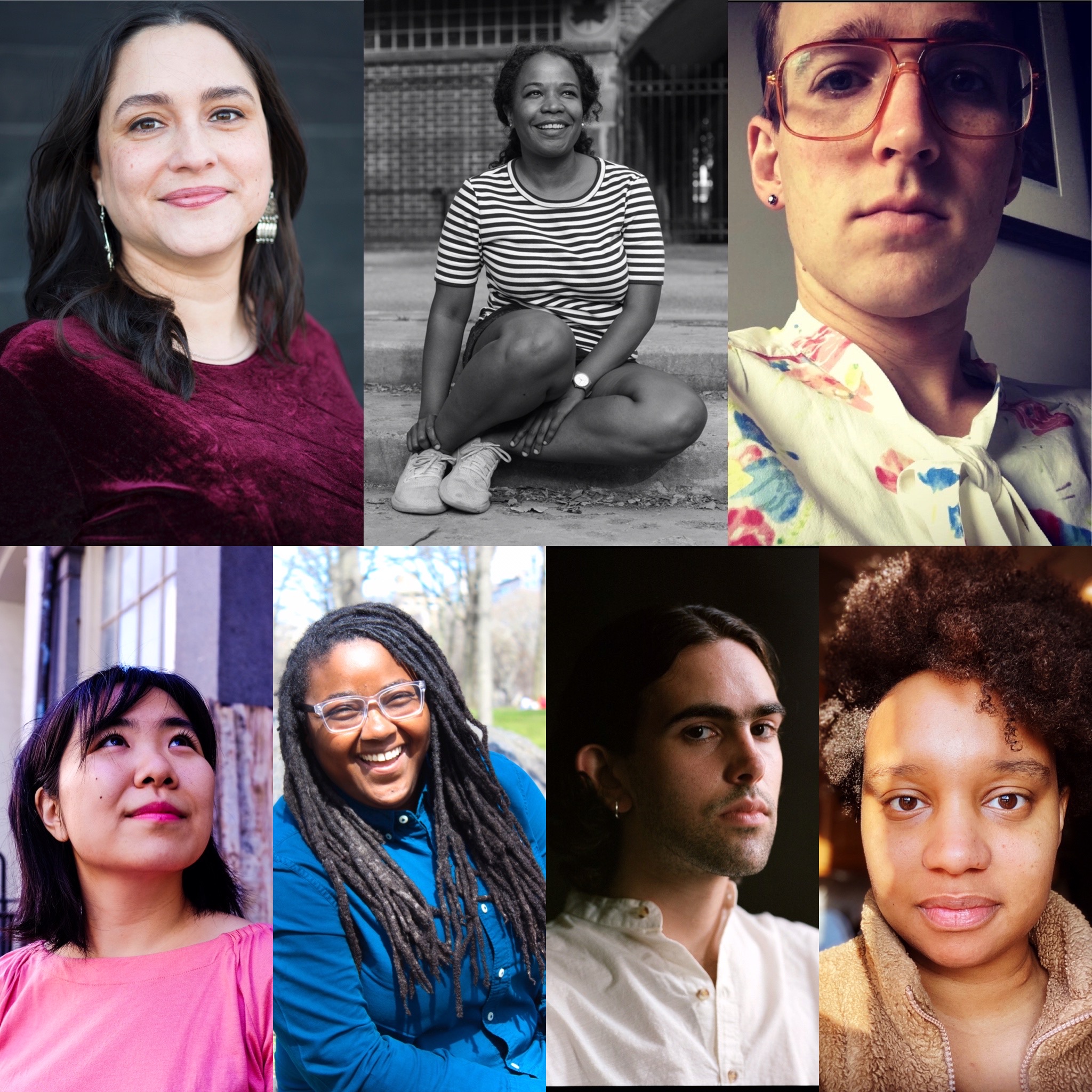 We are so excited to announce our next incoming class of resident playwrights, who will officially begin their seven-year residencies in the Fall of 2021:  a huge congratulations to Jaclyn Backhaus, Eboni Booth, Agnes Borinsky, Julia Izumi, C. A. Johnson, Sam Max, and Charly Evon Simpson!  We are absolutely thrilled to support these writers’ artistic process in the years to come.  Learn more about these amazing playwrights below.

Jaclyn Backhaus is a playwright, educator, arts facilitator, and mother. Her plays include Wives (Playwrights Horizons), India Pale Ale (2018 Horton Foote Prize, Manhattan Theatre Club), and Men On Boats (Clubbed Thumb, Playwrights Horizons). She is one of five Creative Directors of of the process-based arts facilitation group Fresh Ground Pepper, and she is one of the fourteen members of the current cohort of The Kilroys, a bicoastal collective that celebrates women, trans, and nonbinary presence in the American theater landscape. She is a Lincoln Center Playwright-in-Residence, and she was once a 2016 Tow Playwright Resident with Clubbed Thumb. She got a BFA from NYU, where she now teaches some skillsets of playwriting to brilliant students. She resides in Ridgewood, Queens, with her husband Andrew J. Scoville, a theater director, and their son Ernie. Currently, she is writing nothing and reading everything. Send her book recs at jaclynbackhaus.com.  Photo by Marcus Middleton

Eboni Booth is a writer and actress from New York City. Her play Paris had its premiere at the Atlantic Theater Company. As an actress, Eboni has appeared in productions at Playwrights Horizons, LCT3, Manhattan Theater Club, Ars Nova, WP Theater, Page 73, Soho Rep., Clubbed Thumb, and more. Eboni is a graduate of the University of Vermont and Juilliard’s playwriting program.

Agnes Borinsky Agnes Borinsky is a writer from Baltimore, living in Los Angeles. Recent projects include Ulysses S Grant in the New New World at PAM, Brief Chronicle, Books 6-8, with i am a slow tide, Weird Classrooms at University Settlement, Ding Dong it's the Ocean with Rady&Bloom, and Of Government with Clubbed Thumb. 3 Hole Press published her play, Brief Chronicle, Books 6-8, and Sasha Masha, her young adult novel, comes out this fall from FSG. She is convener, with the help of the Bushwick Starr, of the Working Group for a New Spirit, an editrix at Riting.org, a member of Masrah Ensemble, and has collaborated on all sorts of projects in basements, backyards, gardens, circus tents, classrooms, bars, and theaters. Alumna of Brooklyn College and the Los Angeles Permaculture Academy.  Rustchukfarm.org (site is down temporarily, but will be back up in the near future)

C.A. Johnson is a Brooklyn-based playwright originally from Metairie, Louisiana. Her plays include ALL THE NATALIE PORTMANS (MCC Theater), THIRST (2017 Kilroys List, CATF), THE CLIMB (Cherry Lane Mentor Project), AN AMERICAN FEAST (NYU Playwrights Horizons Theater School), and I KNOW I KNOW I KNOW. Most recently she was the Tow Playwright in Residence at MCC Theater. She was previously the 2018 P73 Playwriting Fellow, The Lark's 2016-17 Van Lier Fellow, a Dramatists Guild Fellow, a member of The Working Farm, A Core Writer at The Playwrights Center and a Sundance Theatre Lab Fellow. BA: Smith College MFA: NYU.  www.cajohnson.info

Sam Max is a writer and director living in Brooklyn. Their works for stage include Coop (Theatertreffen-Stückemarkt), Pidor and the Wolf (Winner: Chesley-Bumbalo Award, Finalist: National Playwrights Conference, Honorable Mention: The Relentless Award), and Twin Size Beds (Under the Radar Festival, Excerpt: Museum of Sex). They've been a member of The Public's Devised Theater Working Group, Pipeline Theatre Company's PlayLab, and they've been awarded support and residencies from National Sawdust, The Mastheads, Cutting Ball Theater, Hermitage Artists Retreat, and the Foundation for Contemporary Arts. They are currently developing a TV project with Before the Door Pictures. Sam's plays are forthcoming in translation from Suhrkamp Theater Verlag in Berlin. samspacemax.com  Photo by Maria Baranova.

Charly Evon Simpson’s plays include Behind the Sheet, Jump, form of a girl unknown, it’s not a trip it’s a journey, and more. Her work has been seen and/or developed with Ensemble Studio Theatre, The Lark, The Eugene O’Neill Theater Center, Chautauqua Theater Company, Salt Lake Acting Company, The Fire This Time Festival, and others. She has received the Vineyard Theatre's Paula Vogel Playwriting Award and the Dramatists Guild's Lanford Wilson Award. She has commissions from theaters including MTC/Sloan, Cleveland Play House, and South Coast Repertory. She’s a core writer at the Playwrights' Center and a member of New Georges Jam. www.charlyevonsimpson.com